I am a wordsmith (TRANSLATION: nerd). I am fascinated by definitions, etymologies, pronunciations and most especially by the ways in which human history and culture influences language. Though your English teacher would have you think otherwise, language is fluid. Grammar rules change (just ask any journalist and editor about the rule governing usage of the serial comma and you’ll see what I mean), spellings change, definitions evolve and each year brand spanking-new words are born. In fact, over 900 new words and phrases have been added to the Oxford English Dictionary this year. Those words include beatboxer, bestie, DIYer, dead white male, and wackadoodle to name a few, but womyn is not one of them. Believe me, I checked.

The first time I encountered the word woman spelled W-O-M-Y-N was a few months ago. I was trolling online news services and there it was, peppered throughout a diatribe left by some radical feminist in the comment section of an article which, oddly enough, had nothing to do with the alleged “war on women” or “reproductive rights” or “male privilege” or anything even remotely misogynistic. I think it was about beets or turnips or possibly cucumbers. Anyway, I thought womyn was a typo, so in typical red-pen-wielding fashion, I responded with a snarky, “Perhaps you ought to proofread before you hit enter LOL…  #W-O-M-A-N.” I knew it was wrong, but I simply could not control the impulse and boy oh boy, did I get schooled for it.

About a nanosecond later, the same radical feminist replied to my reply to her initial anti-male rage-filled comment. It went something like this: Shut the f**k up you misogynistic pig. You can’t seem to grasp that not EVERYTHING is about YOU and your filthy penis. It’s not a f**king typo. It’s an alternate spelling, you f**king chauvinistic idiot – an assertion that we refuse to be a subset of the f**king oppressive male population…”

Whoa. I was tempted to reply, “FYI. I am a W-O-M-A-N so I don’t have a penis. AND if your goal is to assert you are not a subset of an oppressive male population, your mission might be better served if you didn’t replace the A with the letter representing the ONLY inherently MALE chromosome in human DNA, but hey that’s just me. #W-O-M-X-N,” but I didn’t. Instead I made a sandwich then walked the dog.

Her comment stuck with me though, and it got me thinking about the first time I encountered a radical feminist. You know, the type who does more harm than good?  By the way, radical feminist is not one of this year’s new word entries, but as you may recall, wackadoodle is.

Anyway, I was a a college freshman seated in a large lecture auditorium with about 300 other biology students. The lecture topic for the day was fungi and since our professor had a penchant for looping slideshows while he spoke, we were assaulted with a parade of larger-than-life images as he droned on about mold, yeast, truffles, puffballs and of course, mushrooms. Precisely as this image of a phallic mushroom pierced my retinas … 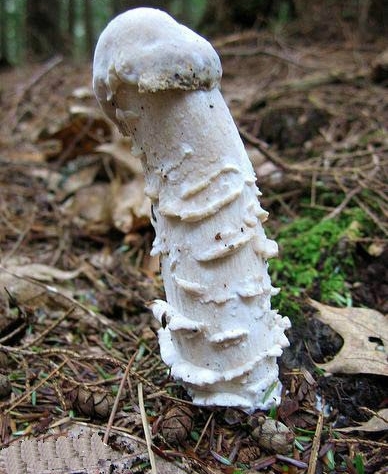 …someone behind me hissed… actually hissed like an angry, unconsolable cat. Unable to control the impulse, I craned my neck in search of the source and found it was an androgynous-looking female. She squinted back at me belligerently, which was startling because I realized I’d been caught staring, plus she was downright angry-scary-androgynous-looking. She waggled her finger my way and slowly mouthed the words TURN AROUND B**TCH. I immediately snapped back to face front, regained my composure and resumed note taking.

She continued these antics throughout the semester, hissing whenever the professor uttered any articulation of the words male, testes, testicles, penis, scrotum, sperm, testosterone. One of her most impressive demonstrations against the “oppressive patriarchy” was maintaing a constant hiss through an entire 50 minute lecture devoted to spermatogenesis. This really happened. I promise. You can’t make up this sort of stuff. Allow me to use it in a sentence… that chick was wackadoodle.

Look, I’m all for female empowerment. If I had a daughter, I’d tell her the same thing I tell my sons – you can do anything you want to do, be anything you want to be if you put your mind to it and work hard. I celebrate the unprecedented opportunities modern women enjoy as a result of the struggles of American heroines like Susan B. Anthony, Lucretia Mott and Elizabeth Cady Stanton. I am all about equality for women, but I refuse to buy into the belief, propagated vigorously and incoherently by a bunch of wackadoodles – I mean radical feminists – that women are the helpless victims of a hostile patriarchy. It simply isn’t true. Not in America.

The radical feminist agenda is not pro-female. It is decidedly and misguidedly and  wackadoodically anti-male. I don’t get it. I really don’t. I don’t get hissing at mushrooms and hating men and I certainly don’t think changing the A to a Y in woman is a pressing social issue (or particularly clever). But that’s just me. Who knows, maybe I’m the wackadoodle one.

Over 900 words have been added to the Oxford English Dictionary this year, but womyn is not one of them so…I can bring home the bacon and fry it up in a pan and never, ever let you forget you’re a man cause I’m a woman -W-O-M-A-N… at least for now.

2 thoughts on “The Definition of a Radical Feminist”