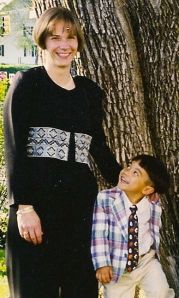 “Dad, go find your own woman. This one’s mine.”

When my son Jared was a tyke, he’d wake up early on Saturday mornings, sprint the length of the upstairs hallway and burst through the master bedroom doors. He’d leap into bed and jockey his way into position right smack in the middle of the bed, between me and my husband, Pat.  Most of the time we’d pretend to be asleep and would stay that way no matter what he did.  He’d employ all manner of strategies in an effort to awaken us:  breathing in our faces, poking us in various and assorted places, pinching, wet willies, jumping on the bed, tickling, you name it.  This became a sport for Jared and on those rare Saturdays when he found us fully awake, I believe it genuinely disappointed him.  I have a fond memory of one Saturday in particular when Jared was barely three years old.  Pat and l were awakened by the familiar THUD caused by Jared flipping himself out of bed onto the floor.  We decided to have a little fun at his expense.

“Let’s pretend to be asleep, ” I whispered to Pat.

“Yeah, and let’s get really close so he can’t get in the middle this time and see what he does.”

We were so amused with this idea of boxing Jared out of the middle that we could barely stifle our giggles. Assuming the “spoon” position (me in the front with my back toward Pat) we braced ourselves for whatever tactics our little assailant might have up his sleeve.  I have to stop for a minute here and ponder this question.  All parents antagonize their children like this, right?  Anyway, true to form, Jared raced down the hallway, burst through our bedroom doors with a Tarzan-like yodel and leaped across the room plopping squarely on the bed.  For several seconds things became eerily silent and since, in mock sleep, I was pressing my eyelids tightly shut, I only can speculate that Jared was quietly standing over us, assessing the situation and plotting his next stage of attack.  At first he nudged at us, trying in earnest to roll us apart, but that only served to make Pat tighten his grip on me.

In one final bounce, Jared propelled himself to the head of the bed.  Refusing to accept defeat, he mounted a third assault and stuck his feet into the ever-so-small sliver of space between my back and Pat’s front. Wedging himself between us like a human crowbar, he struggled with all of his might to push,inch by inch, down the length of our bodies until he had fully insinuated himself between us .

“Dad,” he spewed in s strained grunt, “go find your own woman.  This one’s mine.”

Jared is now 15 years old, a freshman in high school and it has been a dozen years since he staked his claim on me. Thankfully, Pat did not take Jared’s advice to go find his “own woman.”  Instead, he politely shared me, patiently waiting for the day that he would once again have me to himself.  It appears that day has come. There are no more Saturday mornings filled with the three of us (or four when Christian joined the party) snuggling in bed.   There are no more one of a kind valentines with “I LOVE YOU” scrawled across giant hearts cut from red construction paper and glued to white paper doilies.  There are no more spontaneous compliments, “You look pretty, mommy,” spoken in a voice yet to drop even just one octave let alone three. There are no more homemade Mother’s Day cards, or gifts of jewelry purchased from grocery store gum ball machines.  How I wish I had paid closer attention, once upon a time when these things were plentiful, when I was the center of his universe.  My son Jared is 15 years old.  I am no longer the center of his universe because at 15 HE is the center of his universe.  He no longer waits expectantly for me in the carpool line after school.  He no longer flashes that adorable smile the instant he sees me round the corner.  He no longer rushes to hug me hello.  No, no.  I am no longer the center of his universe.  In fact, I am not even second in line.  I am afraid his smile, his hugs, his attentions and affections are reserved for the gaggle of teenaged girls that he defensively asserts are just friends.  I wonder how it happened.  Wasn’t it just last weekend that I heard that strained grunt, ” Dad, go find your own woman.  This one’s mine?”  And I have to wonder. When did I become the “other woman?”

8 thoughts on “The Other Woman”