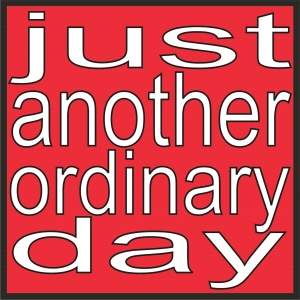 I can’t decide which irritates me more. Sniveling whiners who’d rather file a lawsuit than assume culpability for their own stupid actions, or the slop-sucking, opportunistic leeches who line up to represent them in court. Don’t misunderstand me. I have nothing against lawyers – my own son is applying to law school. I just can’t stomach the bottom feeders who make a living by cashing in on frivolous claims that exploit the judicial system. What a supreme waste of time. It’s what gives lawyers a bad name and why we find ourselves peeling labels, containing painfully obvious warnings, off of everything from jars of natural peanut butter (CAUTION: MAY CONTAIN PEANUTS – no, really??) to household appliances like irons (NEVER IRON CLOTHES WHILE THEY ARE BEING WORN) and microwaves ( WARNING: NOT TO BE USED FOR DRYING PETS). 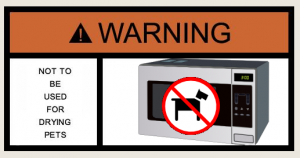 Can you even imagine the lawsuit that predicated the need for a label warning people not to use microwaves for drying pets? I cringe just contemplating the fate that poor dog must have suffered at the hand of some imbecile. I can’t decide which is more disconcerting. The idea that we have become a nation of idiots, or that we lack even the most fundamental sense of personal responsibility.

Who hasn’t heard of the old lady who sued McDonald’s? You know the one. She claimed the cup of hot coffee she bought at the drive-through window was (get ready) hot, and  therefore unsafe. Of COURSE IT WAS UNSAFE. Hot things are, by nature, unsafe. It’s why we learn, from a very young age, to use caution when handling hot stuff. Any two-year old can tell you that.

It seems there is no shortage of ridiculous lawsuits being filed. Every time I pick up a newspaper, I read about some bonehead misusing the courts in an attempt to hold somebody else accountable for his own stupidity. Not every mishap or injury should result in a lawsuit – but that’s just me. Take Jennelle Carrillo and her hot cross buns, for example.

In case you hadn’t heard, Jannelle Carrillo is the woman who recently filed suit against the Dallas Cowboys and their owner, Jerry Jones, over an incident that occurred when she visited Cowboy Stadium to watch the Blue-Silver Debut scrimmage game back in August of 2010. Prior to finding her seat inside the stadium, Ms. Carrillo sat on a black marble bench located outside the entrance to the stadium and toasted her tush. Clearly this was all Tony Romo’s fault. I’m not kidding.

“The bench was uncovered and openly exposed to the extremely hot August sun. The combination of the nature of the black, marble bench and hot sunlight caused the bench to become extremely hot and unreasonably dangerous. No signs were posted at or near the bench warning that it was too hot for persons to sit on nor was the bench roped off to prevent persons from sitting on it.”   (To read the entire Plaintiff’s Original Petition click here.)

Well, DUHHHH. Surely Ms. Carrillo, as a resident of Texas yourself, you must know you can fry an egg on the sidewalk or bake a cake in your car in the extremely hot, August Lone Star sun. The point being…OF COURSE THE BENCH WAS HOT…you didn’t really need a warning now, did you?

I’m not disputing Ms. Carrillo’s burn injuries. In fact, I feel compassion for her. Burns are terribly painful, so let’s say we all just cut Jennelle Carrillo a little slack, shall we? Maybe she was preoccupied or distracted under the extremely hot, August sun. Maybe she was having a bad day. Maybe her feet hurt. Maybe…okay, clearly…she simply plopped down without thinking. Maybe. Still, I can’t help wondering…

If the darn thing was hot enough to cause third degree burns, why didn’t she immediately jump off the moment her derriere hit the bench? Did she somehow get stuck to the bench? Did the clothes she was wearing spontaneously incinerate as they grazed the dangerously hot, black marble? Or perhaps she wasn’t wearing any pants at all? I don’t get it.

Ms. Carrillo’s lawsuit further states, “The condition of the premises posed an unreasonable risk of harm because the bench, made of black marble, became extremely hot when exposed to the August sun. Defendants knew or reasonably should have known that the material used to construct the bench would become unreasonably and dangerously hot when exposed to the August sun.”  (To read the entire Plaintiff’s Original Petition click here.)

So there you have it. The premise of Ms. Carrillo’s argument hinges on the fact that Jerry Jones and the Dallas Cowboys, should have known a black marble bench would become dangerously hot under the August sun. Like I said, “DUHHHH.”

I’m typically a Redskins fan, but I gotta tell you. I’m pulling for the Cowboys on this one.

To find out what others think about Jennelle Cattillo’s hot cross buns, watch the video at Huffington Post…, then weigh in yourself in the comment section.